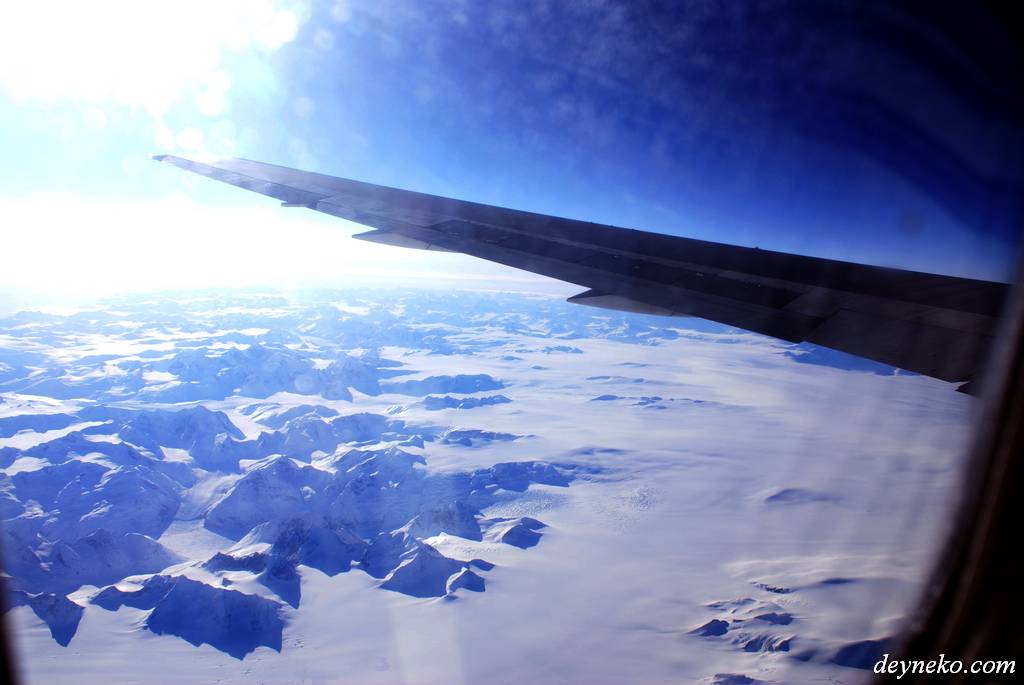 This is Greenland. We are flying to Canada!

We still in Russia…

Flight from Russia to Canada…

And now we are in flight! Our children found other kids in the plane.

Alexandra was busy in the plane with something very important.

There was a map in the plane and that map showed current position of the plane.

Duration of Moscow – Toronto flight is about 11 hours!

Below Greenland – amazing spectacle! Endless snow fields and mountains… Mountains from snow and ice. The Show Queen from Hans Christian Andersen fairy tail lives here. Hmm… interesting who and why gave nave “Greenland” for this place?

And now we are in Canada!

We are in Toronto (near Pearson airport). As you see on the photo below TV shows Winter Olympic games in Toronto. We were fan of Russian team – patriotism not still gone.

Second day in Canada. We decided visit a cafe near the Hotel.

Alexandra tries her English – it is the first talk in English in Canada 🙂 Seems this vendor can understand her.

From Toronto to Montreal by bus…

To reach Montreal we decided by a bus. This is a station during our trip.

The time duration of a bus’ trip from Toronto to Montreal is approximately 6h. There is toilet, electrical sockets for notebooks in the bus and you can use WiFi internet etc.

We are in Montreal. It is our third day in Canada. Nearby Central Bus station we found lot of small hotels with appropriate price and we choose Europeen.

We spent days to walking in Montreal and discover this beautiful city. In the hotel we back only late evening. Right from this room through internet (WiFi) we found lot of apartment rent offers and choose one from them and signed the lease.

That all! At this point our moving to Canada from Russia has ended… First time in Montreal started after it.

Sometimes we received questions by e-mails, “how much is bus from Toronto to Montreal”, “how often the buses to Montreal”. Although there is address of bus company we used on the photo on this page 😉  I will give direct link – click here.
And we used Transaero company for the Moscow – Toronto flight. At that time they had

Our first winter in Canada